Welcome to the Dark Side - An Interview with Brian Azzarello

The American Comicstar Brian Azzarello had a huge impact at Vertigo Comics and DC Comics, using his dark sysle, which seems to touch Noir and Hard-boiled genres as well. This influence can be found in each and every series he was and is writing for. At the VIECC 2022 we met him for a nerdy comic-talks in the Cafeteria. 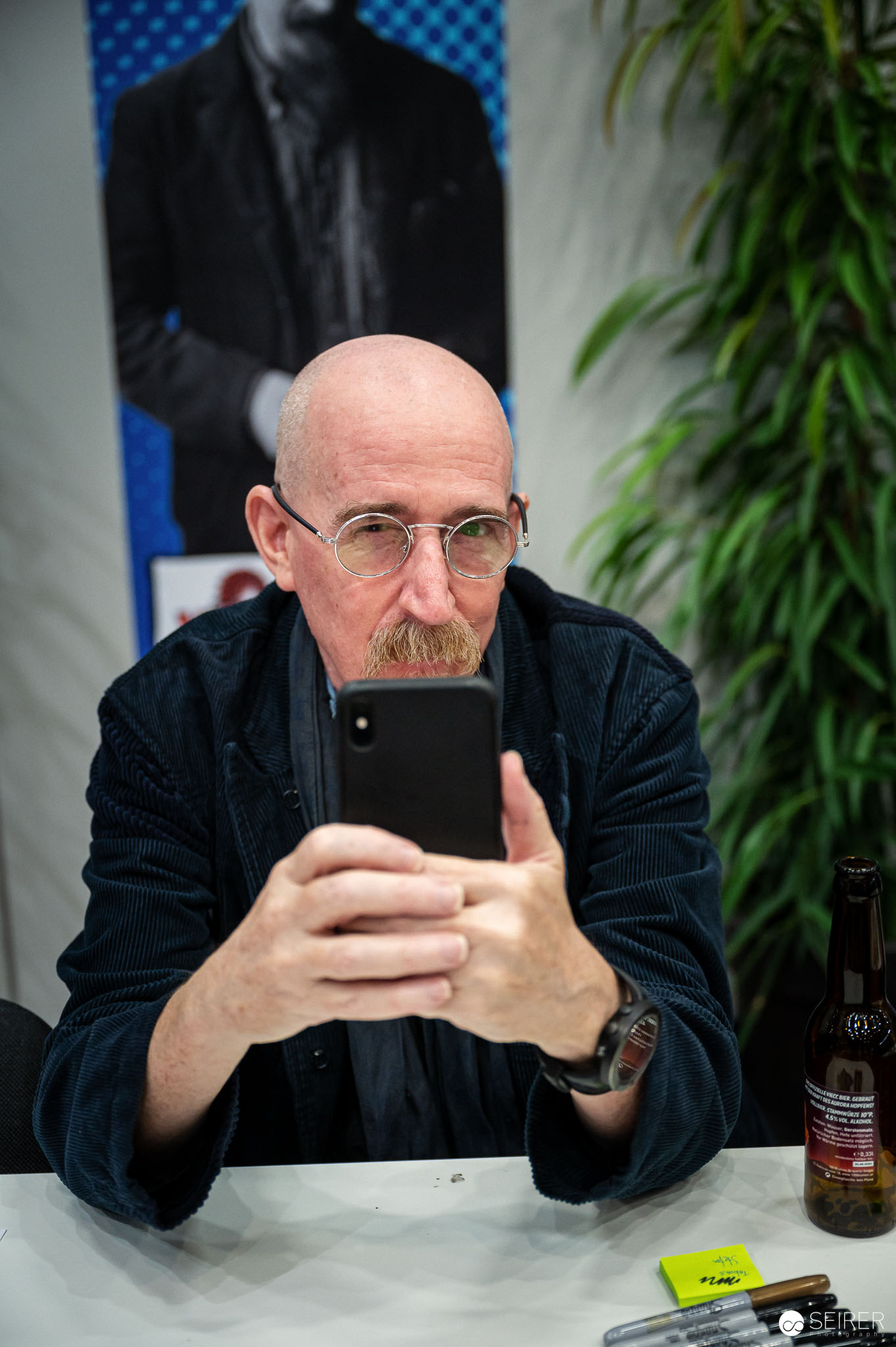 y name is Gabriel. I’m an reviewer for an online portal called ‘Janetts Meinung’. I do mostly superhero stuff, and I’m responsible for DC Comics.

How did you get into comics? Because the superhero genre isn’t your thing from the start…

Exactly. So, as a kid you probably weren’t the guy who was reading Spider-Man…

No, I was not that guy. I was reading… I like DC’s war comics when I was a kid. Sergeant Rock and Unknown Soldier. And I liked Marvel’s monster comics.

Yeah. Like Werewolf by Night and Dracula. That kind of stuff. Creatures on the Loose and then Swamp Thing. ! I liked the Universal monster movies. Like every kid… (*laughing*)

So what happened next, how did you become a writer?

How did I become a writer? (lacht) Somebody said they would pay me to write! I mean it was nothing I was looking to do. I went to art school. So I graduated. Did a few jobs before this one.

Had they something to do with writing?

Sometimes. But no, there was a lot – most of it was completely different. I was restoring antique furniture, before I was doing comics. I don’t know how it happened.

What was Vertigo about at that time when you arrived there?

When I landed there? Pfff… it was about fairies and elves, that kind of s****.

Yeah, Fantasy. And 100 Bullets was NOT Fantasy at all. But they liked the idea! (*laughs*)

So essentially they allowed you to do something which had nothing to do with their line?

Kind of, yeah. Axel Alonso who was editor for 100 Bullets first. We’d worked on Johnny Double. First Axel got me into a lot of the anthologies. Then Eduardo [Risso; comic illustrator] and me did Johnny Double. And yeah, that was pretty successful and then they went ‘what you have lined up to, what do you have next?’. Axel and I had spoken about 100 Bullets and so we pitched it to Karen... Karen Berger, who was in charge at Vertigo at the time. She liked it, but she said ‘This isn’t Vertigo. I like this, but this isn’t what we publish.’ And Axel said, do I mind if I show it to Jenette Kahn, publisher of DC at the time. He sent it to Jenette, and she read it and the next morning she said ‘When are we publishing this?’

So you got a really strong response for it, this was really liked?

The funny thing is, that afterwards, after 100 Bullets, after the 80ies, Vertigo was exactly what you started. It was known for the hard-boiled stuff.

Yeah, but what 100 Bullets did – it was successful, it opened the door for a lot of different stuff.

And how did you get offered jobs writing superheroes? The classical superheroes. Batman, Superman?

I think … Wow. Those are two different stories.

With Batman I can see the way from 100 Bullets. It isn’t that far away.

Superman was… that was all Jim Lee’s doing. Jim called me and said… - you know, Jim and me we’d become friends - he called me and said ‘Hey I wanted Superman for Twelve, for a year.’ Like he’d done Hush, he wanted to do Superman. ‘Ok cool. Good for you!’ And he goes: ‘I want you to write it.’ And I’m like ‘I’m not a Superman writer, Jim.’ He said ‘No, I think you can do that.’ That was pretty early on, I learned that Jim doesn’t ask you to do something, he tells you to *laughing*. So when he said ‘Oh I think you can do it’, it was over, it was like ‘Oh god, I’m going to do Superman’.

If you get the opportunity to get a penciller like Jim Lee, to draw your stuff, then I think you have to be all over the place.

Are there any characters from DC, who you would be interested in? I just wanted to say John Constantine…

It’s a different one, and he has to interact with characters from the main DCU, which are not really suited to Constantine’s world.

No. He wouldn’t do that. He wouldn’t like to do that. I don’t think in the whole of the Justice League Dark idea… John Constantine doesn’t work with… I mean if he ends up working with you, you probably going to end up dead.

So he’s still backstabby, but it’s played more like you have to love him, because he’s so backstabby… so he’s not a real asshole anymore.

If anything, Justice League Dark should be fighting John Constantine! *both laughing*

That’s true, that’s true. You said Superman is not a character you know how to write. How did you approach this? Because he’s a reporter, so there’s something you can start from to get him boiled down.

He’s a reporter? No. That’s his secret identity. He’s Superman. That’s who he really is. To me. Ok? That was my approach. Clark Kent is the costume. In some way Bruce Wayne is the costume. Batman… he’s easier to wrap your head around. Superman is hard. I mean it was like, you know when Jim talked to me about it, like ‘what are we gonna do, this guy’s perfect, how do we approach this while he makes a mistake?’ That’s what I like writing anyway. I like to write about people’s mistakes. That’s what Constantine was like, he was easy. Cause all he does is mistakes. And then he’s gonna fix them. He doesn’t always fix them right. And usually somebody shouldn’t be paying a terrible cost but pays a terrible cost because of Constantine.

Yeah and Superman has a way to better his mistakes more easily, because he has so many possibilities, so many powers, and that’s why he’s so difficult to write.

The stories have to, they have to have a certain kind of likeness to them… they always had. We went for a much sombre tone. When this ends, even though things are put back in order they should be, this kind of had a sombering effect on Superman. The world is the same, but Superman isn’t.

What do you think of Man of Steel, which took Superman to a bit darker tone?

The film? I loved it. There’s a character that Jim and I created, so we see some money from it (lacht). I love that movie!

Wonder Woman. You wrote a really wonderful complete arc with the New 52.

It was very structured. For me, it introduced a lot of Wonder Woman mythology, an own sub-universe. How did you come up with this?

When the New 52 was being pitched… ‘chage these things, change these things’… can’t change Wonder Woman, but can change the world in which she interacts. What makes her different, instead of Superman with a bra. There’s a lot of stuff sometimes… these characters are completely interchangeable. It doesn't matter. A Superman adventure is similar to a Flash adventure. What’s the difference? They are all the same. Wonder Woman - what can we do to change her? Let’s change her environment, let’s change her family. So we changed the gods, took them out of the togas, made them more just like… do you read any Greek mythology, the gods are… they’re not nice! (laughing)

Not at all! They are more like people with powers.

It was a very good series, I liked the dark tone. As you said before, that you grew up with the Universal monster movies, and it kind of reminded of them, because of this monstrous fantasy world, which was working nice together with the whole Wonder Woman mythos. It’s one of my favorite series of the last years.

Oh thanks! I loved working with Cliff [Chiang; Zeichner]. What a good time. Designing those characters.

The New 52 wasn’t a fail in my opinion. But not every book in the New 52 was on the same level. It’s impossible to do with 52 series… but there are some which are higher up.

Glad we did it. I think the only thing that stuck from what we did was… I mean I didn’t read Wonder Woman for a long time, but I’m pretty sure, is it still Zeus her father in the current continuity?

What are your future plans for a series, what are you up to?

DC? I wanna talk to DC for some Wonder Woman… we’ll see.

Taking a different approach to it or continuing your first arc?

Different approach. Well… setting it in a different time. I want something ancient.

In ancient times? Wow… that’s beautiful. That sounds good. I will check it out, if it comes out.

Good! I got one reader. (laughing)

And then I’m going to create some stuff for Boom and Comixology.

One question maybe more: your wife is a comics artist…

Did you collaborate on something ever?

Never. No. I thought that’s how we stay married – we don’t work together. But I was wrong! Turns I it has nothing to do with comics. (laughing)

Thank you for your time, it was a nice talk.

Sure! Good time with you.

I hope you enjoy your time in Vienna. 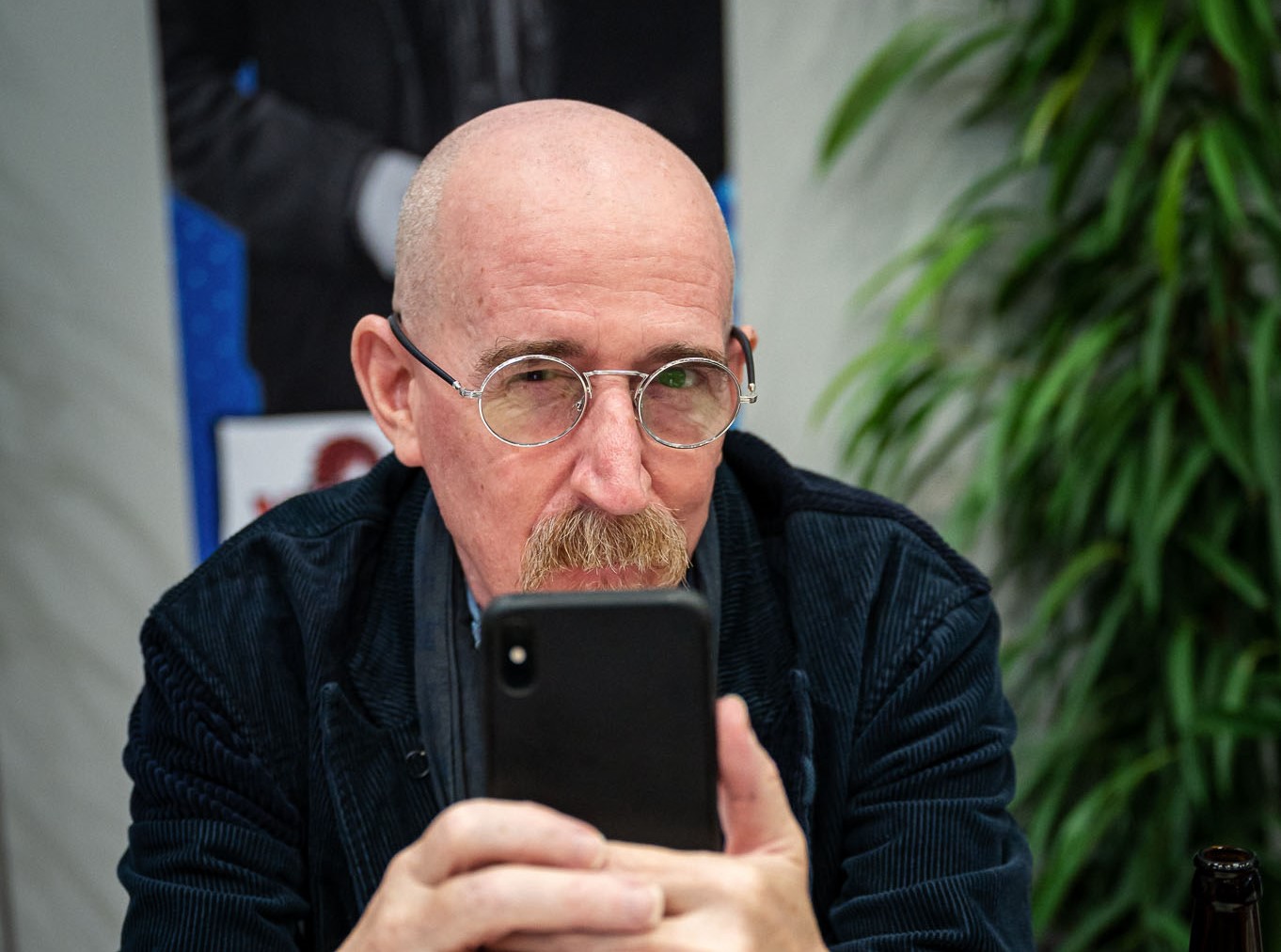