Interview with Sylvester McCoy at the VIECC 2018

If somebody watched “Doctor Who” in the 1980s and discussed about it’s strange Scottish actor, it could be only one incarnation of the legendary Time Lord: The seventh Doctor, portrayed by Sylvester McCoy. Half comedian, half actor, he became a lot different to his previous selves. McCoy, who was also playing Radagast in Peter Jacksons “Hobbit”-Trilogy, was visiting Vienna for the Vienna Comic Con 2018. We were very happy for the opportunity to have an interview with him.

Since the early 1970s, when you joined the Ken Campbell Roadshow, you are in the show business. You did a lot of different jobs. Stuntman, Comedian, Doctor, Wizard. What would you say – until today – was your most challenging role?

My most challenging role? Well, I think playing the fool in “King Lear” with Ian McKellen. Normally in England and Great Britain they cast an actor to play the fool. But the fool is a clown. And lucky am I, my career is a bit a mixture of acting and clowning. Normally the fool is played very straight. But I managed to get humour into it. Which I was very proud of, because that means when the king goes mad and the fool realizes what’s happening to his beloved king, he suffers very badly. And so the contrast between the comedy and the suffering was good. Well that, I suppose, that and playing the spoons with the London Concert Orchestra in Barbican Hall.

You also played the spoons when you where the Doctor, but when you took over the role, the whole series was in a strange situation and you did not enter the series with a proper regeneration scene. You had to double Colin Baker yourself. How was that situation for you?

He is a big fellow. So they put me in that costume and they lost me for three days.

And then they stuck a wig on my head, and I looked like Harpo Marx, from the Marx Brothers, but it was really strange to do. And so I promised myself, whatever happened to my Doctor, I would always come back for the regeneration into the next one.

And you did, in the movie.

After the first season your incarnation of the Doctor became less funny, but more like a tactician. But still, you were able to show humour and show talent like in “The Greatest Show in the Galaxy”. What did you like more – the lighter, funnier doctor, or the later, darker tactical Doctor?

Well, I liked playing with both. I mean, when I arrived I hadn’t seen Doctor Who for years. Cause on those days – VCRs were just coming in. Before that, there was no recording. I was an actor, working in the theatre a lot, so I could never record anything and watch it afterwards. And Doctor Who was always on when we were preparing to go on the stage. So I had this distant memory and I arrived with my own bag of tricks. You know, I did comedy. So I started off comedic. Chaplinesk. You know, that kind of idea. But then I started to understand the Doctor – what it was. I realised it was one of the great television roles and you could mine it so much. So then I thought, wait a minute. I want to bring back the mystery of the Doctor. Cause too much was known about him. And in order to bring back the mystery you have to create a kind of attention about what his game was. So it was when he became devious, maybe. But at the same time, I always wanted to keep the comedy. I wanted to keep the comedy as a front and the dark side. Also at the same time my grandmother, who lived to be a hundred – that was then, now everybody is living to be a hundred, but back then it was unusual – I went to see her and she was so bright, but she was weary with live and longevity. And my Doctor was 950 years old. So I wanted to bring that in. I wanted him to kind of carrying a burden of tragedy and sadness, that my grandmother had about having lost children and friends. You know that kind of thing that comes with age. The lucky thing was I did not have any kind of baggage of knowing what Doctor Who was about, because I lost touch in it. Otherwise I would not have been able to do that. So it was ignorance. Myself and Andrew Cartmel, the script editor, he was Canadian and he did not know much about Doctor Who. So we were blessed by our ignorance and brought the show into another form. Peter Moffet, the last producer, he told me one night, he said up until then Doctor Who had been cartoonlike. So we brought it into another form. Darker, more dangerous, more interesting place. Although I killed it off, I was also very pleased I left it with a good kind of root to go. And actor Christopher Eccleston carried it on, the others did as well, I believe.

When you now look at how Doctor Who is done, are you looking back maybe a bit jealous and are wondering, how your run as doctor would have become, having the budget and special effects they have now?

The thing is, I think we were blessed. Not by budget, but by time. We were allowed to do four episodes for one story. Our writers could write four episodes. I think they are cursed by only having 45 minutes. Okay, the sets are better. But the people miss that the sets are shaking and all that kind of stuff. And CGI – you know it’s CGI. When we had a Dalek to go up the stairs in my story, how they did it, was not CGI. They didn’t press a button and it got “Weeepweep”. What they did was - they got two scaffolding poles and they got a Dalek. They didn’t even got a plastic Dalek or a light Dalek. They got a normal Dalek and they got two poles on the side of it and behind the wall they had another pole going up like that. Then they got ten men. And that ten men pulled the Dalek. And they got the bloody thing up the stairs. That’s who we did it those days.

(Looks at our fez) I was the first Doctor to wear that.

I know, just for five second though, but…

Five important seconds. And I had the mop as well.

I know the mop, but in which episode?

It was both the same one. The Silver Nemesis. I was improvising, playing around with that set. Put it on and danced with the mop.

That was great. Unfortunately our time is now over. Thanks a lot for the interview. It was a pleasure

Sylvester McCoy was the whole Sunday at the VIECC. He started off with a panel on Main Stage. There he told stories about his early career in “The Ken Campbell Roadshow”, about his role as seventh doctor in “Doctor Who” and finished with his interpretation of Radagast in “The Hobbit”. The actor and comedian was brilliant, charming and entertaining as always. He managed to make the audience laugh a lot of times. 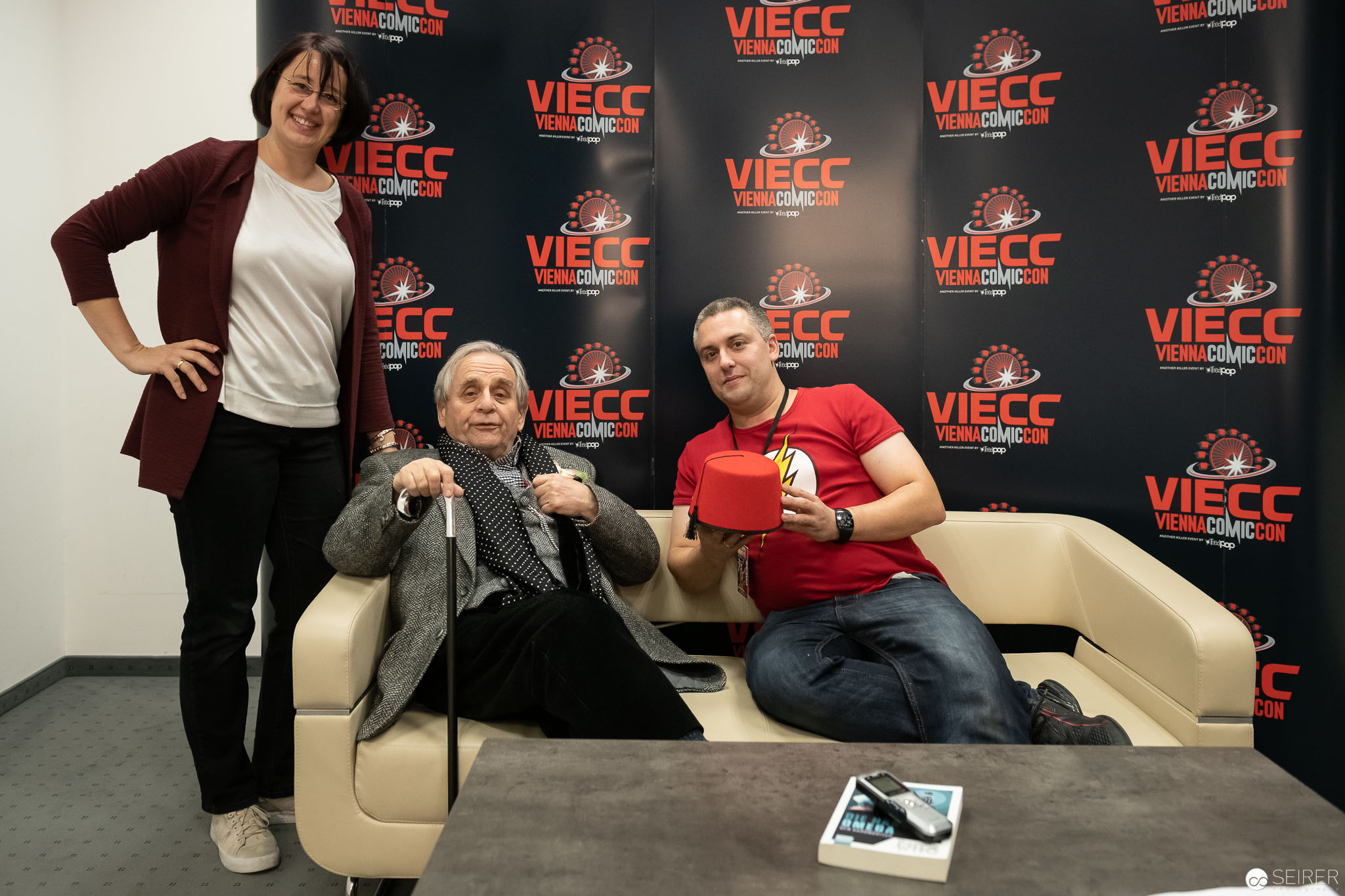