"It’s easier to stand up for somebody else"

US-actor Max Grodénchik is one of the fans favorites. Mainly he is known for his role of Rom in Star Trek – Deep Space Nine. Although has been already 18 years, since the last episode was produced, Max still can be found on many different conventions. He is known for his humor and that he is very open to talk to fans. As we got the chance to have an interview with him on the VIECC 2017, we were very happy about that.

My first question. You were in 37 episodes of Star Trek Deep Space Nine out of 179…

You lost two on the way?

There were some of them where you played a bigger role. The first one, which was most memorable was “Little Green Men”, where you are stranded in the past.

Great Episode. I have to be careful what I say, but that episode turned out to be a lot better than I thought it would.

This Episode was a start in developing Rom as character. Before that he was maybe the mean brother.

There was recently a documentary about Deep Space Nine, with a lot of interviews. They interviewed me, the producers, Armin (Shimerman), Jeff(rey) Combs, Terry Farrell and many, many people. I was told, when they thought Quark was the series first regular Ferengi, they thought of him, that Quark would be light or humorous. When they gave him the brother Rom, they thought he would be the darker, more serious Ferengi. When they saw us acting on film they saw that they had it backwards. Armin could do the serious stuff and it was better for me to do the lighter stuff. That was, what happened. I never knew that. So Rom became the more lighter, more comical.

I remember one of the earlier episodes, there is a possibility that Quark gets killed…

Thrown out the airlock…

And it ends up that he survives and Rom is quite disappointed by that. This is a bit of dark touch.

And then Rom says, brother I am so sorry and Quark says something like, I’ve never been prouder of you. That I had some Ferengi instinct to get rid of my brother.

How much influence did you have on playing your character?

I think on TV in general you have very little, extraordinary little influence. And in Star Trek you cannot change a line. Which I like. It’s Gene Roddenberry’s way of honouring the writer. I’ve been in readings where the writer will work on a play for years and now some famous actor goes over it and says “can we change this line?”. And the writer will say: “Sure, sure, I’ll change it.” And I wanna say: “No, give in for him because he is a famous actor. You worked hard on that line.”

So this line has a purpose.

Exactly. The only influence you have … I think they write to your strengths. They write something and then see what you do well and what you don’t do as well. They saw like with Armin and I, that Armin was serious and I was more comfortable with lighter stuff. Then they wrote more light stuff for me and darker stuff for Quark. And that’s the only influence, and that’s nothing you can control. They write to what you do well and what they need in the series. Very little input. What was great about the writers was, I could call them and ask them things. I remember talking to René Echevarria one afternoon with Armin about the next and the last episode of DS9, when Rom becomes the Grand Nagus. We did not understand it and he explained why they thought it was a good idea. The writers always took time if we had questions. I would go to our script coordinator and she’d say: “I will call them for you.” She would call them and then call me over to tell them what the question is. They were very, very good at that. I had access to them, so I could learn to do the role better.

That’s because Rom had this big change over the sevens season so he became from funny side to be important. He became an engineer.

He became from somebody under his brothers thumb and he couldn’t handle (his son) Nog. Keiko (O’Brian) wants Nog to go to school and Rom says we don’t do that, our kids don’t go to school, we just throw them out in the market place and let them fight for themselves. Close to the end of that episode you see Rom throwing Nog into school and that is when Jake and Nog start to become better friends. He does that the he stays out of trouble, it wasn’t really so that he gets an education. But then Nog expresses an interest of going to Starfleet.
It’s easier to stand up for somebody else than for himself, especially for your kid. Rom is able to stand up against Quark. In Facets, which is a Dax episode, Nog takes the test and fails. And Rom finds out that Quark has sabotaged the test, so that Nog would not start in Starfleet. Rom waits for Quark to come down a corridor in the hallway. And he says: “I know what you did. If you happen again to hurt my son, I will burn down the bar.” He throws him against the wall. That felt really good.

You already mentioned, Rom became the Grand Nagus. There is another character you played, and this was the first Grand Nagus.

That was a dream sequence, I think.

Yes, it was. And it was a lot of make-up! The only thing that saved me was, I knew, we will never gonna do it again. I was happy about it, 'cause that gave me a chance to try something else.

It is fun that Gint was played by you, essentially Quark imagining Gint to look like you, as Rom is not the typical Ferengi. Maybe it was prophetic.

It was! Because I heard that he became the great Nagus because some executive from Paramount saw this episode with his kids and liked it and called then with ideas. One of his ideas was that Rom becomes the Grand Nagus.

Asides from StarTrek, you have some connections to Austria, one of them we know from ComicCon. Two years ago we talked to the guys who did this Wienerland Series. Can you tell us something about, how you got into that?

Yes. How did I get involved into that? I really don’t remember. Maybe through Johannes Grenzfurthner. He is a filmmaker. It was screened here on the Comic Con. And I don’t know what happened with it. They turned down money from some Americans, I heard. Honourable Klingon-like Austrians! But I am trying to remember how we got in touch. We come back to it later.

Gabriel. Did you watch the new series?

I watched every episode. And I told Jason, I really think they are going in a good direction. Of course I liked to be a Ferengi. But the fans will decide. I think it’s great. I like Michael very much, a strong girl!

One final question. I heard you are an expert of the rules of acquisition. Would you have a rule of acquisition for the day for us?

My favourite rule of acquisition by far is number 48.

Do you want to know what it is?

We are no Ferengi!

The bigger the smile, the sharper the knife.

So we will watch out there!

Thank you very much for your time.

Thank you very much. 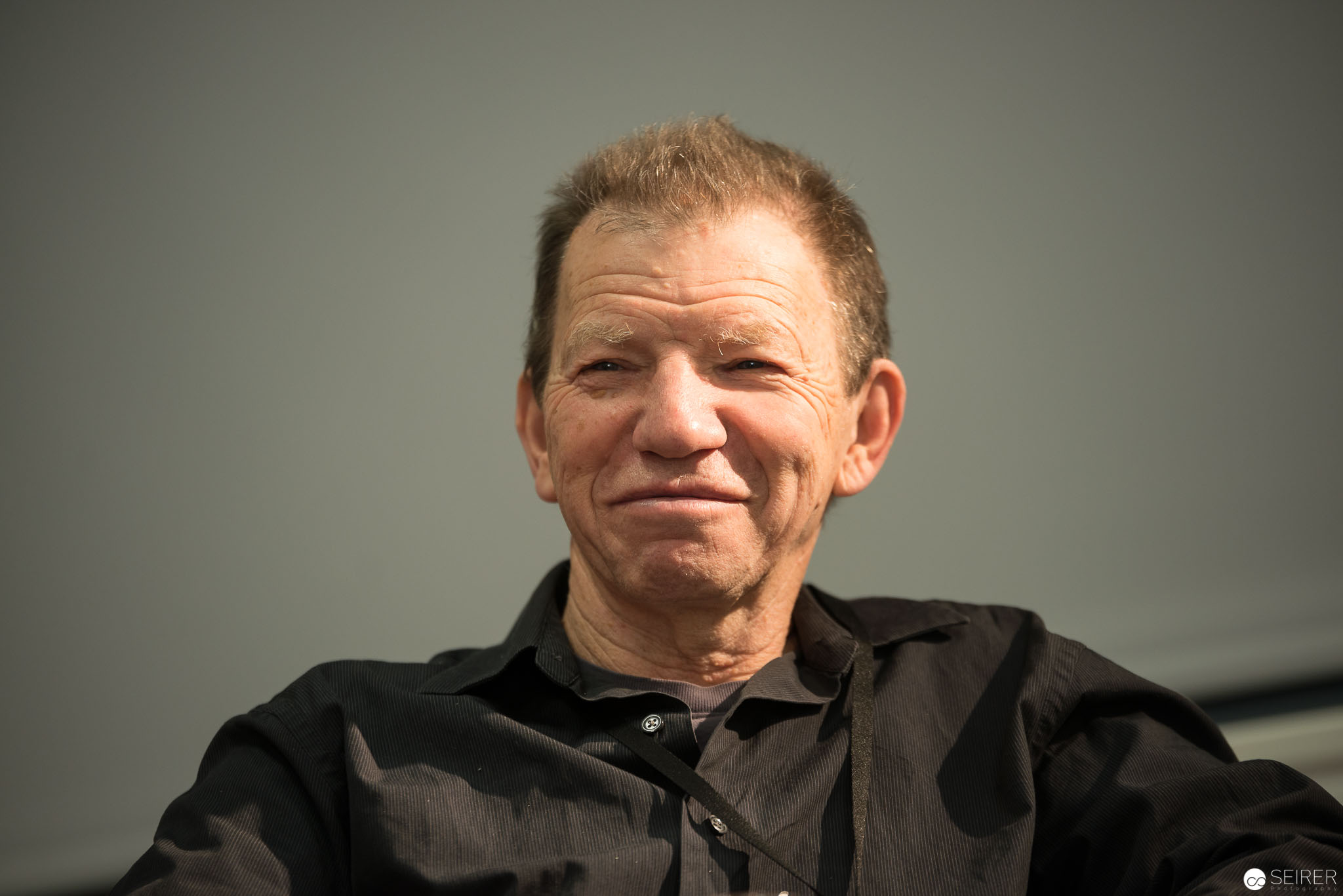